The Last Train to Zona Verde by Paul Theroux 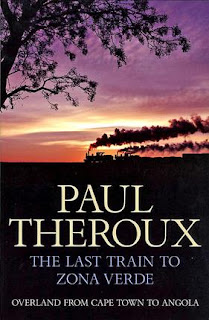 Paul Theroux, starting in Cape Town and only taking land transport, makes his way through Namibia and into Angola, a place not known for its travel hot spots. He offers a compelling, and starkly realistic portrait of this part of the world - from its small, hopeless towns, ringed by poor slums and townships, to decaying, corrupt cities such as Luanda. He probes the meaning of slum tourism in Cape Town - where busloads of tourists pour into the townships, gawking at the poor who live there – presenting both sides of the debate.

Taking local transport, such as decrepit 4x4 taxi  that breaks down in the Angolan bush, Theroux is right in the heart of nowhere, offered a glimpse of life there. Chewing on a piece of leathery, inedible chicken baptised by clouds of flies, he takes out his notebook, curiosity intact to ask what the drums in the distance symbolises. It turns out the young girls in the village are undergoing an initiation of sorts.

Earlier on the narrative he meets up with the San-speaking “real people” in far east Namibia, the Ju/’hoansi, a people caught between two worlds, that of the ancient hunting-gathering world and this modern world and finds them hurtling into the present, donning T-shirts and embracing the now, skins only put on for the display of tourists and curious travellers such as Theroux.

He writes: “They observe the seasons ... years have no meaning, history has no meaning; the past is simply gone and largely unremembered. ...

Leaving them he observes the duality and the Western longing to return to ancient times through our image of these people: “The image of the Ju/’hoansi we cling to – I did anyway – is that of a wild-dwelling, self-sufficient people. We seem to need them to be that way, not merely different from us, and purer, but more different than they really are – tenacious, resourceful, generous, peaceful as if inhabiting Eden. They are reminders of who we once were, our ancient better selves. At one time, long ago, all of us were foragers on earth. What a relief it is in a world yearning for authenticity to know that though we have blighted our habitat, there is an unspoiled place on planet, and a people who have defied modernity by clinging to their old ways. The past recaptured. Isn’t it pretty to think so?”

He visits Windhoek, a clean orderly city, but like so many in Africa, ringed by poverty in the form of slums. He visits a game lodge, rides elephants in the Okavango Delta, ponders the ethics of this, and visits Etosha, home of the mass tourist in Africa, here to see the game and believing they have found the real deal. Which, as he points out, they haven’t.

Finally arriving in Luanda after a spell in the smaller city of Benguela, he alights from his rickety transport in the suburb of Benfica, “a district of heavy traffic and ugly buildings, stinking of dust and diesel fumes”. He witnesses the crash of a small car, a driver emerging with bloodied hands and face, “bystanders laughed. The bloody-faced man staggered, his arms limp, his mouth agape, like a zombie released from a coffin. He was barefoot. No one went to his aid. He dropped to his knees and howled.

“Idiota,’ a man next to me said and spat in the dust.”

His entry into Angola’s capital city is a harshly true portrait of the heartlessness that some cities sear into their people, and cities are not where he wants to be, he concludes. Luanda lives on the proceeds of its oil-rich reserves – but little of that wealth reaches the majority of its citizens.

And it is here that Theroux’s journey will end – disheartened by the grinding poverty and the dust of corruption that sees a culture of bribery rise up and batter its people into submission; he acknowledges that there is no more left to see.

The Last Train to Zona Verde is powerful portrait of a part of Africa.

Posted by Arja Salafranca at 5:37 AM No comments: