Review of An Intimate War by Donvé Lee

THE intimate war – that closed battleground between a couple, fought within the confines of coupledom but, at times, no less bloody and messy and horrific than that fought between thousands in so many public war zones. 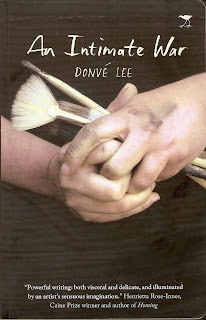 And, even harder to understand, both for those within the intimacy of that personal zone and those standing by watching the wrestling of two people, is being unable to comprehend or to help.
This novel charts the unsteady, murky territory of the relationship between an unnamed man and a woman. They come together, move apart, and come together again, drawn time and again by the passion that unites them, despite the destructive forces that run through their relationship.
As reader, you know what you’re in for from the moment you read the opening line: “The first time we divorced we did it on a serviette,” a divorce that leads once more, to undressing and “our limbs entangled with the limbs of the tree, my feet rooted in the ground my arm stretched out to the sky”. We’re in the tangled, twisted territory of attraction here, and so the narration continues.
The prose is poetry, almost dreamy, the story is told almost entirely in the present-tense, with Lee using the second person point of view to tell the story, the narrator addressing the text to the you of the man she seemingly cannot separate from. This can be a difficult device to sustain – although Lee manages it with a skill that means you read effortlessly, and it carries you along so that you don’t notice the unorthodox narration. The lack of quotation marks around speech adds to the dreamy, surreal quality of this story, and yet the tale is anything but dreamy.

Lee’s style is to use run-on, made up compound words, punctuation sometimes discarded in an effort to let the text flow on, again a style that evokes the half-wavy, half-seen dream world.

Instead what follows is heartbreaking, all too real, and not dream-like at all. It’s the poignant story of a man and woman who will find their love stretched and broken by the man’s inability to trust the woman. His turbulent, volatile emotions destroy their world, even though the woman tries to hold on, her love somehow intact, strong, always trying to mend his shattered soul.

It’s not hard to see why she carries on trying, the eroticism of the man’s love is forcefully expressed. Despite his own wounds this is a man who “is handing me back to myself. “Through the promise in your eyes. Beneath the balm of your voice. Under the miracle of your tongue.” He buys her a full-length mirror, encourages her to explore and love her body, despite its plumpness that she so despises, or has despised. And in tender love scenes that most intimate act assumes its beauty and power through Lee’s poetic touch.

And yet, within the love, poison: “A carapace has begun to grow over my soft centre. Your offerings of flowers have lost their innocence. They are bittersweet pills you feed me in an attempt to erase the latest bruises on my heart. It’s not your flowers I want, it’s your trust.”

Instead the narrator finds herself defending her decision to wear lipstick when she goes out, with the man accusing her of trying to attract other men, and the violent cycle has begun: “My daughter watches and she learns about the things women do to please their men.”

And still, the push and pull continues, coming together, driven apart, desire and love morph into despair and the therapist’s eyes assume the woman’s pain, and still the rollercoaster of it all continues, an intimate love closed to the understanding of outsiders.

Why do we love the people we do, and how can we untangle ourselves from destructive passions? There are no answers, simply the continuing tide of love through it all.