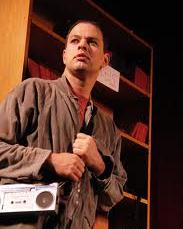 Now showing at the Old Mutual Theatre on the Square from July 13-30, My First Sony is a one-man show with Israeli Roy Horowitz, in the title role of 11-year-old Yotam.

The title refers to Yotam’s obsession with recording every sound uttered by those in his life –  providing an audio diary, and a way of making sense of his world. He needs it, with an irresponsible, womanising father who continually berates the insecure Yotam about his weight problem, criticism serving as mask, and further eroding Yotam’s fragile sense of self.

Horowitz presented the phenomenal play The Time Keepers last year at the same theatre, and brings a similar energy to this one-man show.

In a question-and-answer session after the show, he revealed that he has been playing the role of Yotam, off and on, for the past 15 years. He became intrigued by the novel by Benny Barbashe when he was fresh out of acting school, met the Israeli writer and persuaded him that he was the right man to adapt the book into a play.

The result is a poignant, moving piece of theatre with a rather shocking ending, a beguiling exploration of a father-son relationship filtered through a young boy’s eyes. Highly recommended.