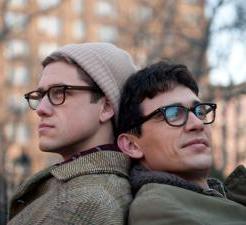 The headliner for the third leg of the Out in Africa fest this year is Howl, a film about a poem, rather than a biopic, which is what I was expecting.
Howl is epic in scope, rather like the poem itself, written by Beat poet Allan Ginsberg in the 1950s.
Spilt into four parts, Howl tells the story of the obscenity trial of 1957 when, bizarrely for a modern reader and audience, the poem was tried for obscenity. Interspersed with this is a rendering of the poem by James Franco in the title role as Ginsberg, reciting the poem in a smoky jazz bar to an appreciative audience...Read more here
Posted by Arja Salafranca at 2:08 PM