Mrs Stevens Hears the Mermaids Singing is re-published by Open Road Media in 2014, with an introduction by Carolyn G Heilbrun. It first appeared in 1965, and was her first openly gay or lesbian novel. Sarton, the poet, diarist and novelist, tried to reject the label “lesbian writer”, preferring to consider herself a writer who plumbed the depths of emotions and relationships, whatever the nature of the relationships being described.

Reading the novel 50 years after initial publication certainly reveals that some books are of their time: what might have been frank and almost shocking back then reads tamely now. The “lesbian” parts of the novel are meek indeed – blink, you feel, and you’d almost miss them. The story centres around the poet and one-time novelist Hilary Stevens, who had success with a novel when she was in her twenties, but has since turned to poetry. The novel takes place within a day of her life as she waits for interviewers from a literary magazine who are coming to talk to her that afternoon about her life and work. Within this framework, Hilary returns to episodes in her life.
Memory forms a counterpoint and backbone to the almost quotidian story of a writer waiting for interviewers, pushed to re-live her life through the past while anticipating their questions. The book reads as a mediation through a writer’s mind – the story weaving and meandering through her past, as she wakes, talks with a young man, Mar, who helps her with her garden, and goes through the hours until the interviewers come. We learns of Hilary’s young marriage, her novelistic success as a young woman in England at the time and her subsequent widowhood.

“Love opens the doors into everything, as far as I can see, including and perhaps most of all, the door into one’s own secret, and often terrible and frightening self,” she tells the young, questing Mar, searching in his own way through his own burgeoning alternative sexuality. The interviewers, Jenny and Peter, are young, polite, conscientious readers of her work, bringing a respect to the proceedings that Hilary has always craved. 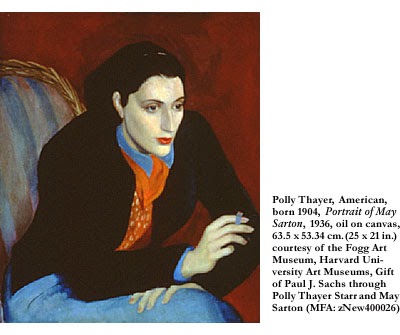 They also open the door on another pre-occupation that seems quaint to debate now: whether women can truly be artists given the demands on them to wives and mothers, and the debate runs right through the past, through Hilary’s reminisces into the present day interview. Says Jenny to Peter while they drive down to Hilary: “I guess women pay a pretty high price for whatever talents they have. I guess it’s harder for them than it is for a man, always.”

Peter counters with his belief that, “A writer’s life is obsessed, driven ... I just don’t believe you can do it with your right hand while your left hand rocks a cradle, Jenny!” The debate will come up again, and seem antique reading them from a distance that includes the feminist movement of the 1970s when so many barriers holding women back in the western world have tumbled, and being a woman writer or a woman anything is not quite the struggle it was back in the mid 1960s.
Antique too, in its way, is Hilary’s assertion that she loved both men and women – as did Sarton herself. There are no tell-all passages in her reminisces or her comments in the interview with Peter and Jenny – the comments are almost an aside, even, barely there. Yes, they might have been more shocking back in that less frank and more straight-laced era. But reading them against a background of the 21st century means you start wondering what the fuss was about. But that’s the thing with reading this novel – you have to peel away the layers and read it rather differently than a contemporary novel.

The revelation of homosexual love was almost scandalous, shocking and Sarton’s publisher advised her against publishing it. That she did was an act of bravery, and meant she was forever after “outed” as a lesbian writer – which, as I mentioned, caused its own discomfort. I was curious to read this classic – having recently come to Sarton via her melodious, almost dream- like published journals. I found it somewhat meandering, with ironically, the past reminisces holding more interest, and containing more meat than the present day narrative.
The older Mrs Stevens comes across as somewhat pernickety, too cautious – a contrast to the younger, more daring woman who went on to choose writing as her life’s work. Perhaps that’s a consequence, so to speak, of age – the slowing down. When Mar complains of feeling so tired, at his young age, Hilary exclaims, “Good God, boy, you’ve only just begun!”

And yet, in many ways, this is a rich novel, a story that takes in the vicissitudes of time, what it means to be a writer, and one who lives alone, what it means to love, to survive, to live and question both the times you find yourself in, as well as to attempt to break out of those strictures, as the fictional Hilary Stevens attempted, and as Sarton herself so often achieved. Reading this novel against the biographical elements of Sarton’s life you can’t help comparing the fictional with the real life writer – there seems so much of Sarton transmogrified into the ageing Stevens, finally finding herself in her late, but welcome fame.
Posted by Arja Salafranca at 5:15 AM