The General’s Women: a novel
by Susan Wittig Albert 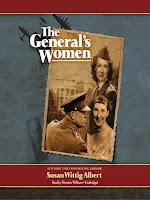 "She would forever remember that moment as the point at which her old life ended and a new life began. If I survive, she thought, I will be different. I will know, always, that I am a part of something larger than myself."

The story is astonishing. The General’s Women tells the story of the love affair between General Dwight Eisenhower and a former model and now driver, Kay Summersby during the Second World War. At this point he had been married to Mamie for twenty-five years – years in which they had had two children, and lost one of their young sons to illness. Kay is married but separated, and engaged to be married to another man when she comes to work for Ike when he is stationed in London, directing military operations. Wittig Albert’s astoundingly readable novel imagines that affair – from London to North Africa and back to England.

Told mostly from Kay’s point of view, there are still sections devoted to the thoughts and lives of both Ike, and Mamie.

Mamie is in in Washington for the duration of the war, isolated, away from her husband and the frontline. And it’s Mamie who comes off badly – her portrayal, while sympathetically painted – means she comes across as a cossetted, spoiled army wife, more interested in unpacking her china than in understanding the politics of the war raging across the ocean. The world of jealous army wives is fascinatingly portrayed – wives jealous of the rankings of their friends’ husbands, and wives who revel in gossip and in repeating such gossip under the guise of being sympathetic. And Mamie hears the gossip, is sickened by it and can do no more than smile through it. You feel somewhat sorry for her.

But set against the strong, brave Kay, driving in war-darkened London, through the infamous pea soup fogs and then in the frontline in North Africa – Mamie comes off badly. No wonder, you think, Ike would have preferred the resilient Kay to his delicate, neurotic wife. And when she reveals how far she may have gone to save her marriage, the dislike is compounded.

Ike, the historical figure, is humanised here. A man confident when plotting war tactics, less so when declaring his feelings for another, or even admitting those feelings to himself. Kay and Ike’s romance is portrayed against the violence of war, snatched, secret moments are all they have; their time is limited, in more ways than one. Nevertheless the affair is rendered beautifully – as two people fall in love against the odds, against perceived wisdom, despite his marriage and growing fame, and despite their age gaps. Kay was in her thirties when the affair began, Ike his early fifties.

Wittig Albert writes of their togetherness: “Still, as she drifted off to sleep with Ike fitted closely against her— the two of them breathing together, their hearts, she thought, beating together— she knew that a line had somehow been crossed. Her last thought as sleep came was her mother’s word: dangerous. Yes, it was, she thought, yes.”

The story is compellingly told – and as always, Wittig’s historical fiction is gripping, fascinating, enjoyably so. The novel wears its research lightly and convincingly. Her research is based Kay’s memoirs, Ike’s letters, fellow officers’ wartime diaries, and newspaper archives. Wittig evokes deprived war-time London with an authenticity that is remarkable, and contrasts it against the harshly lit North African scenes and the claustrophobic Washington apartment scenes.

Of course this is fiction – but as you read on, astonished, you can’t help wondering where the truth lies. To this end Wittig includes an author note at the end, explaining some of her sources and reasoning, and is as fascinating to read as the novel.

There’s no spoiler in saying that of course Ike left Kay – we all know he went on to win the Presidential election in 1952 and had his wife Mamie at his side, not another woman. This novel forces us to ask who are the winners, who are the losers, and at what price does power come? If Ike had divorced Mamie in the conservative 1940s the scandal of his affair and other political machinations would surely have put paid to his political ambitions.

It also forces us to look at the real sadness that results when people put ambition, duty, fear of the consequences or the lust for power above and beyond their own feelings. Was Ike being inauthentic to his true self? Did he stay with Mamie because he knew he’d be ruined professionally if he didn’t?

In the end Kay comes across as both a warm, loving woman unwittingly falling in love with a man so charismatic and powerful that she couldn’t help herself, despite her own engagement to another, and we’re reminded through her story that love happens. Despite ourselves, love happens, even when it seems foolish and stupid to let it. But Kay’s story is ultimately a sad one – by loving all and risking everything, she also lost so much too. And the poignancy of that pervades the end of this novel.

You’re left with the questions: did Ike really want to divorce Mamie and marry Kay? You be the judge in the excellent, highly recommended The General’s Women.
Posted by Arja Salafranca at 10:20 AM