A doctor in apartheid’s army 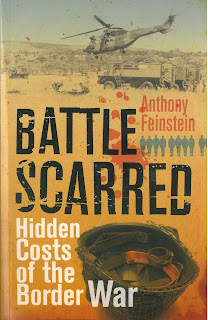 There is a world of sadness wrapped up in these walls. The psychotic patients, floundering in another dimension, are unaware of their plight. Their families see it all, though. When Mom and Dad arrive at the gates to pick up their lost son, their worry lines run deep, shoulders slump and anxiety makes their eyes dart like pinballs. The army knows there is no way back for these boys. Damaged goods must be returned.”

There are few choices for white men of conscript age in 1980s South Africa: choose to endure army training, and subsequent call-ups after that; proclaim yourself a conscientious objector and endure three years in jail; or leave, knowing you will never be able to return, or not without paying your dues to the state.

Anthony Feinstein trains as a doctor, and considers his options while taking violin lessons in Paris after winning a prestigious music prize. But the army has not forgotten him. He returns. He’s a doctor, two years should pass quickly. After basic training in which he learns that he is “lower than snake s***”, he chooses to go into plastic surgery, but the posts are full, and he’s assigned to psychiatry, the letters “PS” for psychiatry following just after PL for plastic surgeon. “The army decides I am to be a psychiatrist,” Feinstein writes, and so begins a meagre training in an army hospital, the place of sadness.

And then a different sort of hell begins. Feinstein discovers that he is to be posted to Oshakati in the then South West Africa, ordered to treat soldiers emotionally wrecked by their time in the Border War. It’s a place of unbelievable heat, and summer has yet to set in. But worse than that is the palpable sense of disillusionment and inevitability, “No one said war would be easy,” writes Feinstein. “Over and over this little homily is sung. It’s the stock response to every piece of bad news – landmine kills three, signalman hangs himself, sapper slashes throat, plane crashes, gas tank explodes.” The hot, sluggish days go on. Among the cases he treats, Feinstein encounters schizophrenia in a young soldier, and also counsels a traumatised abused wife of an army major.

Before long he finds himself in another hell in the bush, Tsandi, the baking pit of a tented camp, where he tastes fear as he’s flung into the heart of battle for the first time. The only escape: “You cannot step back from the group in Tsandi. There is simply no space for it. Only one’s thoughts are private and often they make bad company. So best to hang around the icebox and dip in for amnesia, which is what I do, following the lead of those more experienced.”

Throughout this powerful account of life in the army, Feinstein’s wry, witty and at times droll voice narrates the story in a compulsively, compelling manner.

The horrors of life in the army are laid bare, the brutality and the cruelty unfolding under his gentle pen. Musician, doctor, Jew, the combination couldn’t be worse in a regime designed to crush. Feinstein makes for a sympathetic character in his own real-life story; far from crushed, he nevertheless chooses to make his life elsewhere, beyond the borders of a SA gripped in rooi gevaar 1980s paranoia.

This memoir is a highly readable and recommended addition to the canon of stories emerging about life in apartheid’s army.

First published in The Sunday Independent, January 15 2012
Posted by Arja Salafranca at 10:03 AM