Primal Night: a collection of short stories by Maja Kriel 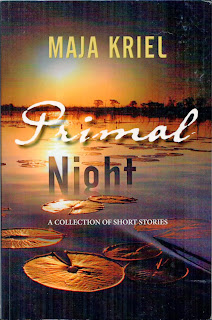 Maja Kriel’s second collection of short fiction, Primal Night, revolves around the theme of travels and journeys. In many of these stories a journey away is the pivot around which the action turns – small realisations come to pass, lives change through these revelations, or a sort of acceptance is achieved. These are also, for the most part, stories told from the viewpoint of a woman in mid life – in many the husband is absent, victim to a cruel disease while in the prime of life, an absence dearly missed, but an absence the women in these stories have accepted and grown accustomed to.

At times, however, the similarity of the circumstances of the departed husband means the stories blur and it feels as it if we are reading about one woman struggling through the vicissitudes that fate has thrown at her.

The women, are for the most part alone, living out widowhood, although in The Door of Life, the widow has found another man to take the husband’s place. In this story, the depiction of love and intimacy between is tender, matter-of-fact, and its description to be applauded in a time when so much of our art – from films to literature – depicts only young love in its myriad forms.

This story, a stand-out, moves across time and memory. The unnamed female narrator recalls her marriage to Zack, now gone, while simultaneously taking pleasure in the comfort of her relationship with “the old man (who) shares my bed”.  There’s an awareness of time’s passing and how it’s taken root, in language that is vividly poetic: “My life tells its story on my face, left its spoor on my skin where I have laughed or frowned....Nature, no longer interested in my beauty, bleaches out its colour.” The old man, meanwhile, has “curiously smooth skin, plump and unblemished. ... His stomach is somewhat puffed and falls into cherubic folds.”

Back in the old days she and Zack would cross the borders of the “puritan country” to gamble and spend time in casinos where this was allowed. Children were conveniently left at home, while Zack gambles and the woman grows bored and then listless from the lack of attention. The woman recalls Georgio, “a pirate of other men’s wives without remorse or responsibility”.  And, also without remorse or responsibility the woman enters into a purely physical affair with this man; but there are lessons learned, “And I realised that the most ardent affairs of the heart happen in dark corridors, last half an hour, but endure a lifetime.” This story is a beautiful mediation of life, and the losses that accrue as we grow older and the necessary and yet quiet acceptance of the withering of the branches.

In ‘Horizon’ we witness the slow anguish of widowhood as the unnamed female narrator comes to terms with the loss of her husband and the story contains some of the most vivid descriptions of grieving. “I spent the first few weeks unwashed and undressed, looking at photographs through a magnifying glass. It was the detail of life that I needed: the green flecks of an eye, the grizzled hairs of a moustache that matched the grizzled eyebrows, the engorged veins on a leg from a lifetime of standing... I didn’t want to be seen or recognised. I felt conspicuously different, as though my experiences were immediately obvious on my face like a disfigurement.” But redemption of a complicated sort (and isn’t life so often complicated), comes later on, as the narrator meets up again with Johnny, a younger man she once knew.

In ‘Last Holiday’ we again return to the theme of the husband dying too soon and the agonising acceptance of that. Marianne and Mordechai take a last trip when they finally accept that his years are running out.  Intriguingly, and interesting the story again moves through narrative time zones as Mordecahi’s childhood in an isolated village is described, one of the few Jews in that place, while describing events of the current time as Marianne and Mordechai’s time together runs out. Another meditative, quietly contemplative piece in which an attempt is made at coming to terms with the life’s realities and losses.

The final story, ‘The Swamp’ is another stand-out in the collection. It takes place in Botswana and is narrated by a man called Charlie. Familiar and intimate in tone – but the story he tells cuts close to the rough justice of life in an isolated post. A black man is accused of a crime – and a cruel lack of justice takes place that cuts into the heart of attitudes in that place. A shocking, and yet achingly powerful story that haunts and leaves you shuddering long after the initial reading of it.