Illuminating the poetry and horror of suburban life 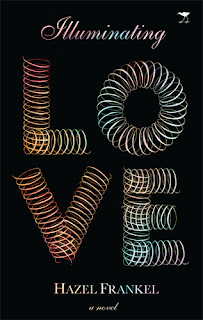 Illuminating Love by Hazel Frankel
Illuminating Love (Jacana), by Joburg writer Hazel Frankel, is set in the heart of that city’s northern suburbs. The novel centres on Cally, a Jewish calligrapher, or soferet. Married to Jake, the mother of two children, Cally is engaged in making an anniversary present for her husband, as well as making a ketubah, an illuminated legal document that records a young couple’s wedding vows, for Aaron. In addition, she has discovered a number of poems written by her late Lithuanian grandmother, Judith. She’s transcribing them into calligraphy and reading each poem, which leads her deeper into Judith’s past, her pre-Holocaust life, her escape and her guilt at surviving, leaving, still living.
These three strands interweave throughout the book: excavating the past through Judith’s words, making the illuminated document for the soon-to-be wed Aaron and his fiancée, while being reminded daily about the love and hope that goes alongside a new marriage, contrast vividly with Cally’s own life and marriage today. Because Cally is dead centre in the middle of an abusive marriage: a marriage once built on the same hope and love that Aaron’s was. But the years have served to erode: Jake remains haunted by his experience in the army, something he refuses to delve into or talk about, a subject that remains taboo within his household. And I use those words, his household, advisedly, as Jake rules his home with an increasingly authoritarian stance, a stance that Cally, still caught up in her love for him and yet increasingly fearful, finds herself unable to challenge. She tries – she goes away on holiday with just him, but Jake’s reactions and behaviour remain unpredictable: tenderness turns to violence all too often. Cally remains trapped.

The only respite and refuge is her escape into calligraphy, a place where choosing the swirls and colours and a particular gold are consuming. Her platonic friendship with Aaron grows as the illuminated ketubah takes shape – yet this is further cause for Jake’s anger. Author Frankel is herself a calligrapher – and the book is rich in authentic detail in the subject – which makes for fascinating, and yes, illuminating reading.
But while Cally’s crumbling, abusive marriage forms one heart of this richly readable novel, the other is devoted to Judith’s poems, with each chapter ending on a poem, which adds the third strand to this narrative.
There’s a line early on which foreshadows what is to come:  “Until I started to learn about Judith, I had thought that history belonged to strangers. Now I know that it is also the personal experience of my family.” And through her past, Cally comes to some kind of understanding. The poems are yet another delight of this book, serving to illuminate (there’s that word again) a lost world, a lost generation, bringing it to life through poetry that’s simple, and yet richly detailed and vivid.
Judith writes of Shabbos rituals, of love, of everyday domestic details, of the pain of leaving your home and country, and relief, and the guilt that follows survivors around. On love: “We do not speak of parting/but it sits between us. We do not speak of love, only/of the deer as it hesitates, one foot in the air, /waiting for the sun’s touch on the crisp snow./ We do not speak /of the train at the station,/ you leaving, me waving you on.”On the dislocation of finding yourself in another country: “I breathed a world/ that knew mushrooms,/ field, forest; …/children sticky with blackberries,/ leapt into stars;/ here, I cannot find/ the path along my tongue.”
As Cally journeys further into her grandmother’s past, the present continues, and life unravels as Jake grows both more distant and violent. Things cannot remain as they are and the dénouement is both unexpected and surprising. There have been hints throughout of Jake’s inability to process his own past in the army, but they remain hints right up until the end, which makes for an awkward ending that, as a reader, you don’t quite feel prepared for, it’s all too much of a surprise, and I wish Frankel had prepared the groundwork on this a little earlier.
Plus, the ending and wrap-up feels a little too rushed and pat, and again, a vague sense of dissatisfaction results. We’re swept along, feeling empathy towards the likeable Cally, interested in her plight, while shuddering with revulsion at Jake’s increasingly unhinged personality. And while Jake is far from being a one-dimensional character, there remains scant exploration of the forces that shaped him.
At other times, I felt the editing could have been tighter. A chapter on a holiday in Cape Town reads more like a journal entry, with very little advancing the course of the story, and could have been dispensed with in a few lines in perhaps another chapter.
However, despite these criticisms, this remains a readable, gripping novel, filled with remarkable detail, and likeable, empathetic characters that ring true. Frankel, an EU finalist with her first novel, Counting Sleeping Beauties, moves the narrative along effortlessly and beautifully. The poetry adds to the charm, of course, and is a delightful, memorable touch to the story. Highly recommended.


To read more of Judith’s poetry, see excerpts from the book at: http://peonymoon.wordpress.com/tag/hazel-frankel-illuminating-love
First published in The Sunday Independent, January 22 2012
Posted by Arja Salafranca at 2:26 AM