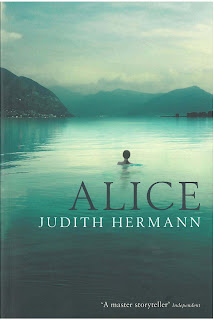 German writer Judith Hermann examines the loss of a loved one through these five interlinked short narratives in Alice (The Clerkenwell Press). Her gaze is cool, detached, the writing style almost blandly obvious. The central character of Alice seems ephemeral: she appears in each story, death is linked to her through her relationship to each dying character: whether a friend’s husband is dying, or whether an old friend, a man in his seventies, is about to pass on.
We get to know and empathise with Alice through the layering of these stories, like burrowing down deep into the text, until, by the final story, the one whose loss recounts a man central to Alice’s existence, we feel we have, at last, become acquainted with the character who moves so centrally, so determinedly through these narratives. It’s gratifying, this slow peeling away at the onion skin of Alice; at last, there’s a sense of completion. Death is a character, a fact, early on, yet these stories are as much about loss as the central figure of Alice.

The first of these stories, Misha, concerns the death of a young man, Misha, husband to Maja, father to his and Maja’s daughter, who remains unnamed. Alice is a sometime lover of Misha, and her relationship to Maja, the soon to be widow, is a rather awkward one.

Friendship would be too strong a term, acquaintanceship too distant. After all, acquaintances don’t take trains and temporarily relocate in order to help Maja care for her child in another city where Misha lies dying in a hospital. In fact, the uncertain boundaries of their relationship are never explained, but rather gently hinted at, a device Hermann uses often in this collection.

Hermann’s gentle, delicate, almost watercolour gaze is reflected early on, the narrative reading at times like a dream. She eschews quotation marks for direct speech, which, for me, always adds a somewhat dreamy quality to a story.

Misha, the man, lies dying in a hospital not far from the flat where Alice, Maja and the child go through the motions of the days; death looms large, preparations both mental and emotional are being made. Yet this lends a rigidity and stiffness to the everyday actions of eating, drinking, visiting a dying man. Everything is not what it seems, although the mundanity of quotidian details belies this.
When the threesome move to a bigger flat, they are greeted by their new landlords and Alice is immediately struck by the scars on the side of the man’s face: “It looked peculiar, but then everything seemed peculiar, had to be accepted for what it was. Alice carried her bag into the front garden and up the broken paving stones of the front path while the child on Maja’s arm kept saying, Rabbit. Rabbit. Rabbit. As if to calm everyone.” Through such almost throwaway lines Hermann indicates the strangeness of the wait for a young man’s death. Later on she thinks to herself, “astronauts. We’re just like astronauts, there’s no place to hold on to”. In this world of death and dying there are no rules, and nothing to grab on to.

In the second story, Conrad, Alice travels with two friends from Germany to the Italian home of her elderly friends, Conrad and Lotte. She is travelling with her friend Anna (“she didn’t want to go anywhere without Anna”) and another male friend, simply called the Romanian.

The setting is beautiful, the villa magical, the lake gorgeous with its cold water in the heat of an Italian summer, and yet, once more, death and uncertainty hover. When they arrive Lotte informs the trio that Conrad is a little unwell. A little unwell turns deadly, and once more a hospital becomes the centrifugal force for the action. While the trio enjoy their holiday, soaking up the sun, there’s the underlying awareness that a man is passing from this life. And yet, there’s little that is morbid or negative about this story, or any of the others that follow on. Death as a character, death as part of life, as Hermann appears to be saying. It lends an unsettling air to life, yet we carry on reading. Alice grows stronger, comes into focus as we read on, and our attention remains riveted on her; she is most certainly fully, and richly, alive as the narrative attests, and so while death is the link, it’s Alice’s life that leads us.
In the third, Richard, a friend is again in need. Richard, the husband of Margaret, dying of cancer in midlife, Margaret phoning, needing cigarettes. Through it all, the vibrant summer of Berlin swirls around Alice, introducing us to her live-in lover, Raymond. Once more we are being led further into Alice’s life. And further still in the fourth story, Malte, as Alice uncovers family history, finally researching the life of her unknown gay uncle Malte, who committed suicide. She meets Frederick, her uncle’s lover from the 1960s, now a man of seventy something, dignified in his sharing of secrets and reminisces.

And then, the final story, Raymond. We witness Alice as an older woman now and her lover, Raymond, passes on. We’re deep into the depths of Alice’s character as she grieves. She matter-of-factly starts to get rid of his things, but grief catches you when you least expect it. She finds that “she couldn’t choose the memories; they came of their own accord; the memory of the garden, Raymond in the aviator jacket – soundless and yet part of it all”. When she discovers a dried piece of an almond horn, she crumples – small, everyday, innocuous objects have the power of memory, and remind one of loss, grief. This is a moving, meditative piece.

This is the closest person in Alice’s life, as we move through the early, raw stages of her loss, “the days would never again be this clear and luminous; maybe she would have to learn how to find pleasure in it; any other way was impossible”.

First published in The Sunday Independent, January 22 2012
Posted by Arja Salafranca at 4:41 AM

This sounds like a very moving book. Thank you for sharing.