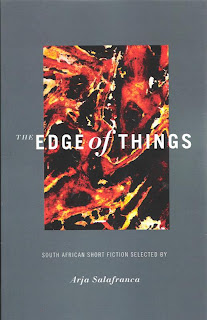 Book of the Week: The Cream of South African Writers
The editor of this eclectic collection of short stories, Arja Salafranca, sifted through over 100 submissions before she chose stories from the cream of South African writers. There was no theme as such, but it seems as if the stories chosen examine people who are in extreme situations,emotionally or physically.

For example, Arja Salafranca’s moving story about a woman forced to live in a restrictive apparatus in “Iron Lung” is a million miles away stylistically from Aryan Kaganof’s tale of decadence and debauchery on a night out in Durban in “Same Difference.” What is similar, though, is both stories deal with  someone in extremis. The narrator of Kaganof's story is the edge of the emotional abyss. The young woman watching her mother in "Iron Lung" is too. There is no easy way to contemplate a happy future when someone you love is crippled in this way.

There are many gems in this sparkling collection. The enjoyment comes not only from the juxtaposition of many different writers, but also from reading stories with such a variety of subjects.

For example, Liesl Jobson’s “You Pay for The View: Twenty Tips for Super Pics” is a series of verbal snapshots of pivotal moments of a mother trying to find a connection with her children. It is written with poignancy and deep longing. “Doubt” by Gillian Schutte is a study of how passion can seep out of a marriage once the chase is over and when feelings of irrelevance grow due to being part of a couple.

Jenna Mervis’s “The Edge of Things” explores paranormal paranoia in a tangible way and examines the valid fear women feel on a daily basis.

The eternal clash with “the other” is explored in Gail Dendy’s “The Intruders”.  Perd Booysen’s “Sinners and Sinkholes” is a delightful modern-day Hermann Charles Bosmanesque tale of ghost towns and gullibility in the arid wasteland of the Karoo.

There are too many stories to mention individually, and some lend themselves to rereading many times. This is the beauty of the colection: there is something to appeal to all astes. And, fortunately, the real star of The Edge of Thingsis the genre of the short story itself.
(Published in The Witness, October 12, 2011)
Posted by Arja Salafranca at 2:10 AM