Silence of the Bushveld

It lay surrounded by grassy yellow veld, hills forming a kind of amphitheatre in the distance. At first we couldn’t see much, with the other game drive vehicles clustered around. The sun slanted down sharply, an oblique wintry yellow, and then our ranger, Gerard Ramage, turned the vehicle around. The mound of the elephant lay exposed: it had died of old age, or so the rangers here surmised, four or five days previously. 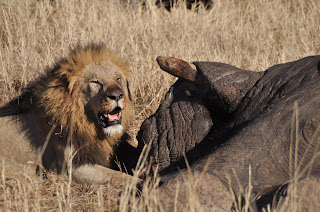 Its trunk had already been nibbled at, its insides were exposed and spilling out, a mess of liver and other organs caught the sun. The huge curve of the ribcage with its immense greyish white bones lay open, flies buzzed around the form. It was incredibly moving to see this great animal exposed, lying down dead, motionless. We are so used to seeing elephants gloriously alive, moving through the grasses and bush, kings of the jungle in their own right. To see one hacked at by predators, reduced to a lumpen piece of meat, rather than animal, was inexplicably humbling. Nearby two lions stretched into and blended into the bush. Two brothers, they had taken to guarding the elephant, it was food for them, each taking it in turns to drink from a nearby waterhole, one always guarding the metaphorical kill.
“Hold your noses,” Ramage warned us as we turned around, moving away from the elephant to make space for other game drive vehicles. Down wind now, the stench hit us like a weapon. Noses shielded, each mentally urging the vehicle on, away. 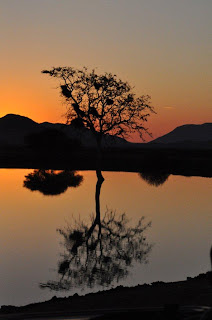 At Tlou Dam the sun was setting, the trees in sharp black silhouette against the orange sky. Rhinos drank from the water, their shadows making pictures on the surface, birds and ducks skimming against the sheen of water, creating ripples and circles. The sun setting into the quiet: utter silence but for the click of cameras as the light faded, each trying to capture something of what you can see through the viewfinder.

In winter the animals are forced to come to the waterhole at the end of the day, as there are no puddles and patches of water where rain might have fallen, as in summer, so the sightings at the dam in winter are quite spectacular.

There were other animals on the drives: herds of buffalo, more giraffes, more buck, even another elephant walking on the verge of the dirt road. At night, Ramages swept his large torch from side to side, occasionally the beam picked out the other-worldly green glassy reflection of a buck’s eyeball, a bushbaby clung to a tree.

We’d driven up from Johannesburg to Tau Game Lodge in Madikwe Game Reserve, a drive of four and a half hours. Two American medical students were visiting from where they were studying in Botswana, a French couple were touring the country. The night crackled on as we tucked into the buffet, pea soup, kudu potjie, oxtail, vegetables of carrots, cauliflower, broccoli, finished off with melktert, malva pudding, panacotta. 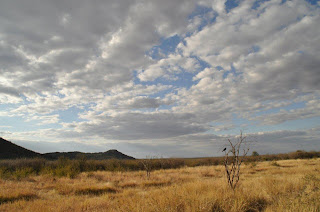 That night I lay back in my curved triangular bath, in my chalet, the light dim. The silence and peace of being in the bush is always a welcome, needed respite against the heady rush of routine and regular busy days. My chalet was spacious – a king-sized bed, a lounge area, a viewing deck over a trickle of river water. Relaxation continued with a leisurely start to the day: in winter, game drives begin at a very civilised hour of 8am.
The next morning, back at the mound of elephant, a jackal nervously, quickly took bites of the trunk, watching out for the somnolent lions.
In a weekend of firsts, I also agreed to a massage by Pauline Mosadi at the Tau Spa Oasis. Years before I had submitted to my first massage, an experience that left me literally chilled, under the cold glare of fluorescent lights in a room silent but for the breath of the masseuse and my own anxiety, and equally chilly in temperature, I experienced a massage that was so painful, I vowed I’d never have another. When I had a leg massage as a part of a pedicure, I again found the whole procedure painful.
Still, third time lucky. And I was. Pauline asked whether I wanted a soft or firm massage. “Soft,” I said firmly. The room was well heated, there was gentle music playing in the background and I finally understood why it is so many people regularly book massages. My head and shoulder massage left me wanting more and left me utterly relaxed, left me knowing this was an experience to take with me, and repeat elsewhere. 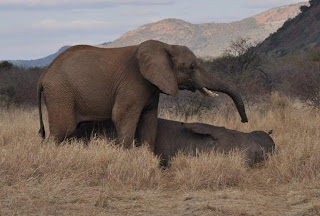 That afternoon, on the third game drive, the third visit to the elephant, the most moving sight of all, and one not often seen, although read about. A bull elephant approached the carcass, mourning the dead elephant. The bull sniffed around the mound, trunk curling over the body, moving around it. Grief was tangible in its stance. The sense of sadness was palpable, visceral. The great animal walked around the dead one again, smelling, sniffing, it knew what it had found and there was no way of mistaking its behaviour for anything but grief. He mock charged one of the game drive vehicles that had gone too close. Then he spotted the lions and roared, chasing them away, ears flapping, trumpeting distress and anger.
We were all silenced by the sight as the game vehicle bounced away from the dead elephant, further into the reserve along the rutted tracks. We had long-johns on to protect against the biting winter air, scarves wrapped around faces, beanies on heads as night fell. Yet there’s an austere beauty to a winter game drive. The discomfort heightens the experience; the cold changes it. 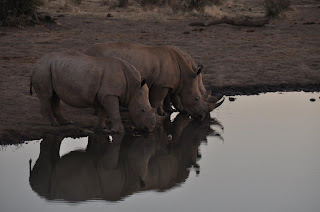 On that night’s game drive moving into dusk, we encountered a herd of breeding elephants on the road, making their way to the dam to drink. Our guide, Ramage, put the vehicle into reverse and the older elephants formed a laager around the young elephants, protecting them. He backed off, a matriarch formed a barrier between us and the young ones as we watched from the sidelines. Just metres away, she looked threateningly at us. “Just keep quiet,” we were told. I needed to hear that.
Taking the opportunity, our ranger took us back to the dam via another route so we could watch the elephants moving in single file along the bank of Tlou Dam, shapes reflected against the grey-blue water, the herd of them: matriarchs, baby elephants, teenagers of the herd jostling with and against each other. The light gradually faded away, and the noise of the cameras clicking stopped as it grew. 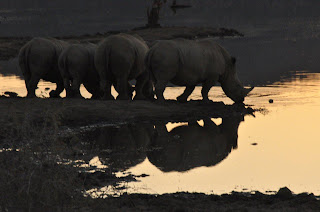 Another surreal orange sunset deepened into night, far off we heard the splashing of gentle swoop of trunks dipping into the water, the herd seemingly oblivious to our presence on the far side, invisible and, for now, unseen.
(Published in The Sunday Independent, October 2 2011)
Posted by Arja Salafranca at 12:26 AM